Atlas Weighing, the trusted name in On Board and Industrial weighing

Is pleased to introduce Wayne Grech to the Atlas team.  Wayne's role of Sales, Product Development and Marketing will further assist and support Atlas Weighing Interstate Agents, customers and dealer network.  Most weighing applications are never the same, therefore a great deal of time is required to provide the right mix of product to suit the customer’s actual weighing needs, whether it be a basic forklift scale or the most complicated On-board weighing application, Platform Scale, Hopper or Silo weighing application, a loss in weight weighing application, weighing with set points and 4-20m/A communication.  The need for an extra person was a necessity to keep up with the current and future demand.

Wayne has been involved in the weighing industry since April 2002, originally working for a major Loadcell manufacturer and importer of industrial weighing products at a wholesale level where he started life as there BDM before finishing in his final role as GM before a new challenge beckoned at Atlas Weighing. 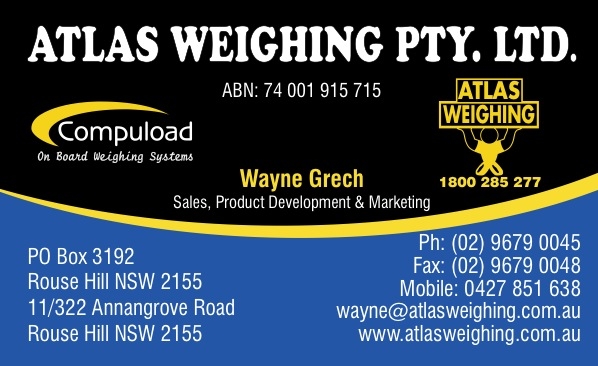